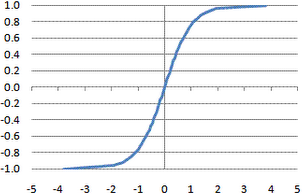 One of the more popular technical indicators is a Stochastic RSI. This indicator starts by taking an RSI of price. Then, a Stochastic of that RSI is taken to limit the output to be between 0 and 100. Translating and scaling, this is mathematically the same as varying between –1 and +1.

Fisher Transform Divergence Indicator generation III is modern indicator with complex mathematic algorithm (BJF Trading Group innovation). You will see divergenses on the chart and indicator. Arrows painted above/below the open bar and not in the past. You can see when actually you can trade. It is never to late! Signals based on closed bars so the arrows above/below open bar never disappear.